While I was hiking on the Bellota Trail just east of Molino Basin in the Santa Catalina Mountains near Tucson, I kept hearing a slow, repeated, melodic bird song of only a few notes. I was never able to get a good look at the elusive bird, but I saw movement in the tree where the sound was coming from, so I took a photograph. When I later looked at the blown-up photo, I discovered that the melodic mystery bird was a Solitary Vireo, which can be recognized by its bold white spectacles and wing bars. 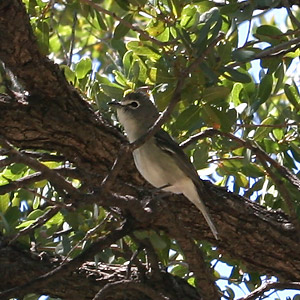 It has been decided that the bird formerly known as the Solitary Vireo is actually three different but similar species, the Blue-headed Vireo (Vireo solitarius), the Cassin's Vireo (Vireo cassinii), and the Plumbeous Vireo (Vireo plumbeus). Unfortunately, I don't know specifically which Vireo species this bird is.