Different varieties of Macdougal's Nipple Cactus (Mammillaria heyderi) can have either white, cream, greenish, or pink flowers. The main variety of Macdougal's Nipple Cactus (Mammillaria heyderi var. macdougalii) that is found here in Tucson has greenish white to greenish yellow flowers. It grows above 3500 feet (1067 m) in the mountains around Tucson, often where the Sonoran Desert scrub, chaparral, and/or oak woodland vegetation zones meet. 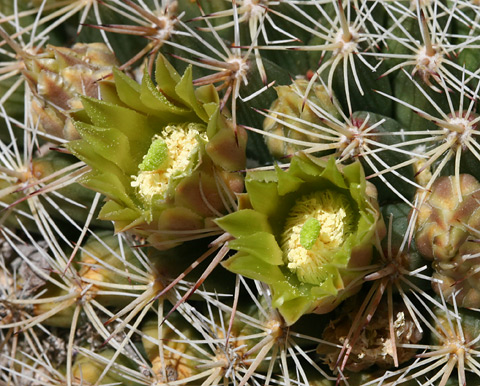 This low-growing cactus is very easy to overlook because it is weirdly flattened in shape with a depressed center and has unremarkably dull greenish flowers. When I saw my first Macdougal's Nipple Cactus at Molino Basin Campground in the Santa Catalina Mountains near Tucson, I thought at first that the cactus must be half buried because it was just barely above the soil surface. I then discovered several more Macdougal's Nipple Cacti and they were all exactly the same, so this was apparently their normal appearance.